we ballin my ninjas ⛹️

I'm sure you're all aware (hopefully) of the "grace" period we have in the rules. If you're not, here's a rundown- after killing a player and identifying the body as a traitor, there is a three second period where you can be killed without it being RDM.

However, this kinda fucking sucks if you're the one who killed a T.

So, my suggestion: replace it with a new feature.

For those of you who have played on moat recently, you might be aware of a feature they have, where, after anyone presses E on a body (identified or not) an icon indicating the body's role appears for everyone who can see the body.
Here are two examples: 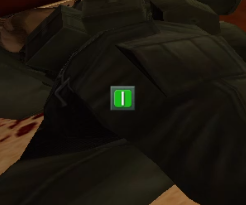 These images kinda suck, but that's all I could find from my recording from last night (all my older moat recordings are deleted). This is the general idea I'm pushing, to help avoid confusion and lower the amount of deaths from scenarios like this. (it's also just a cool feature overall tbh)
Toggle signature

This feature actually helped cut down the amount of rdm from people who would shoot after somebody kills another person for a body since they don't pay attention to the top right corner of id'ing body.
Reactions: Dolph1n

Its a great quality of life change. I'm all for making things easier to see in a heat of a moment and honestly I aint gonna be looking at the white text in the middle if there is a gun fight n iding of bodies going on. Having something right in front of my face is far better.

If it's something that pops up for like 5 seconds before fading away again, +1.
I don't want to see I's and T's everywhere I look, not even if I'm up close.
Reactions: Bubonic and Nebmass

If it's something that pops up for like 5 seconds before fading away again, +1.
I don't want to see I's and T's everywhere I look, not even if I'm up close.
Click to expand...

It pops and fades. Any self-respecting developer would make sure of that. That's how it worked there.
Reactions: Siddo

we ballin my ninjas ⛹️

If it's something that pops up for like 5 seconds before fading away again, +1.
I don't want to see I's and T's everywhere I look, not even if I'm up close.
Click to expand...


it's hard to see but that's about how long they last.
Toggle signature

A solution an old server I used to play on had was just autoproving after a Traitor kill (marked as FRIEND in tab menu, chat message saying person was proven). This was tied to a bounty mechanic which was the main reason for the chat message but I think this would cut down on RDM anyways implemented like this (if we're going the way of not wanting confusion and rdm instead of more traditional TTT)

Yes! I think Veri is already working on this
Toggle signature
Other Suggestions:
Change "Expand signature" to "Collapse signature".
Streamer/Content Creator Perks/Roles on the Discord


TTT Suggestions:
Add an option to block trades from specific players.
An option to upload picture of stats on a weapon.
Changes to "Link to chat"

@veri this is now accepted! I've taken the portion out of the rules related to Grace Period. Lets try this out instead.
Reactions: MisterWhy